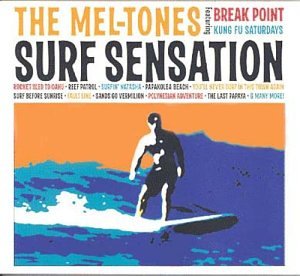 33 songs from Nickelodeon's SPONGEBOB SQUAREPANTS - greatest value of any CD! The Mel-tones brought warmth to the darkest winter nights of Montreal with sounds reeking of sea salt, sun-tan lotion and surfboard wax. Their music explodes in the sun-drenched reverie of a secret surf spot.

The Meltones "Surf Sensation" A VERY healthy 33 tracker (nice sleeve too), from the Meltones from Montreal. Their material has a real surf and Hawaii tone to it with "Perfect Wave" and "Tiki Cabana" being good examples of the latter. The group can also be raucous and there's plenty to choose from in that idiom. We liked "Incognito" (spy/surf) and the thumping "Surfin' Natasha" and the twin guitars on "Go Big Or Go Home". A pile of originals take a while to get used to, but these are very well done and give listeners a chance to hear some fine riffs and edgy drumming and bass - and 33 tracks, in the car CD player, will shorten the longest journey. ------------------------------ Pipeline Instrumental Review, vol 61, Autumn 2003.

THE MELTONES "SURF SENSATION" CD A guitar four-piece, they have Mel Waldorf's Jazzmaster in the front-line delivering rich and raunchy reverb leads aplenty. With Stan Sawczyszyn's Strat providing a contrast on second guitar, there is a balance to their sound that's often lacking in other outfits. Making occasional appearances as appropriate are a Fender VI, electric piano and Farfisa organ. If you like your surf guitar supported by damped reverb picking, tremoloed chords, driving drums and solid bass then this '60s style set is for you. The tracks are all originals of consistent quality and all are kept sensibly short to maintain their impact. There is a scattering of mid-tempo material for balance, but generally these are uptempo '60s influenced surfers. The Mel-tones have absorbed a broad spectrum of surf music, little touches here and there point to numerous '60s bands and recordings. This is a solid album, a safe and value for money buy for surf guitar fans. Completists may care to know that 3 tracks from Surfin' at Black Point are omitted ("Bird Lady From Ghost Town", "Beyond the Stars", "Moon Walk") together with 3 from Surf Before Sunrise ("Infrared", "Sunday Drive", "Breakers at Hanalei") while the final 4 titles are previously unreleased. Written by Alan Taylor.